- June 07, 2016
Punarnava or Red spiderling (Boerhavia diffusa, family: Nyctaginaceae) is a profusely branched flowering herb with creeping nature. This deep rooted glabrous herb is very widespread, and has become naturalized in the tropical and sub-tropical areas. The perennial is found everywhere in Bangladesh as weed. 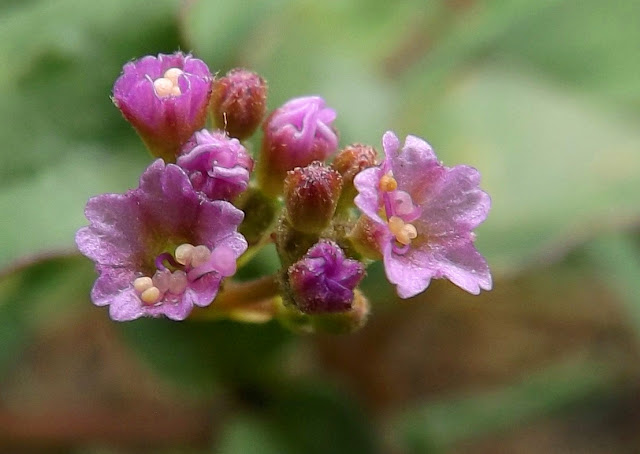 Different parts of the plant are used in insomnia, strangury, cough, fever, asthma, worm and rheumatism. The plant work as diuretic and analgesic. 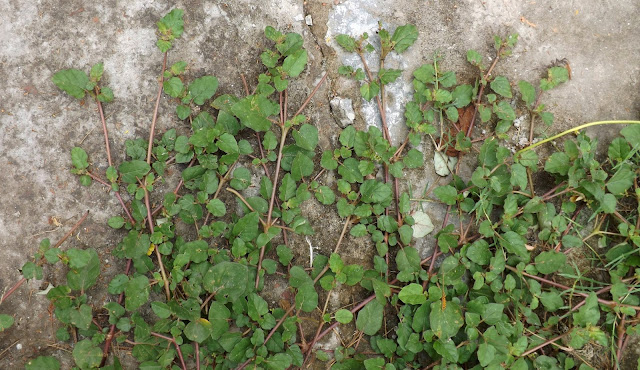 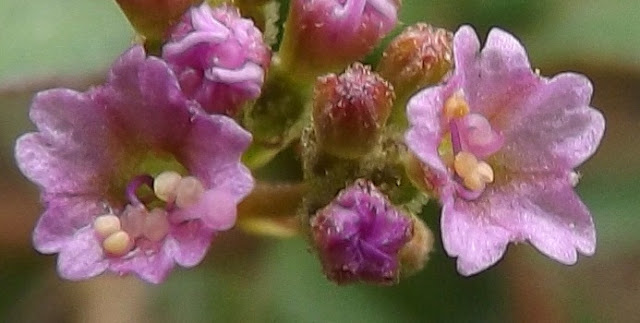 Flowers are red, pink or white, small, on terminal inflorescence. 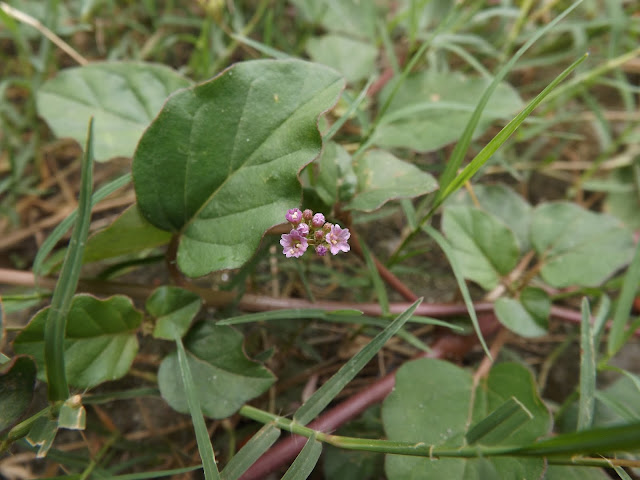 Leaves appear two in one node, one smaller than the other, upper surface green and lower surface whitish, long petioled. Thick leaves are 2-4 cm long, ovate or oblong-cordate, entire or sinuate. 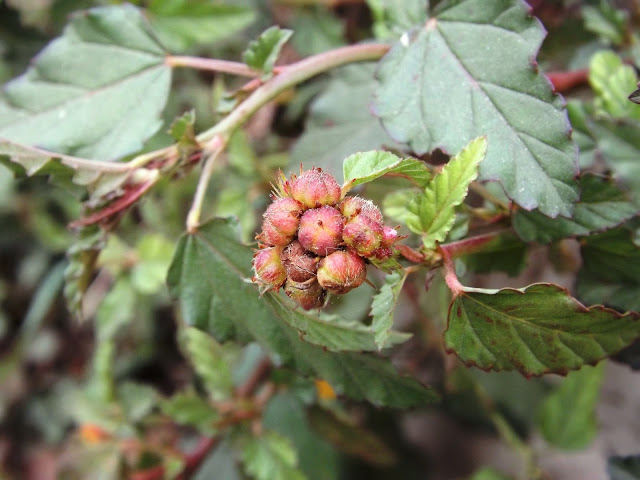 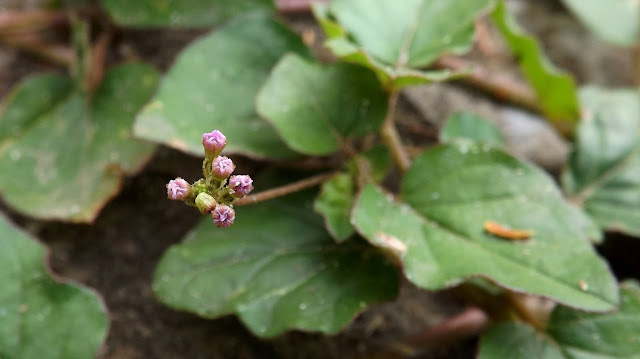 Propagation is caused by seed. Its main root is hard and remains alive to produce new plant in the following year.

Popular posts from this blog 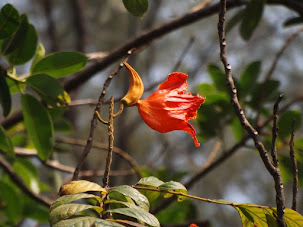 Kulekhara or Talmakhna (Hygrophila auriculata, family: Acanthaceae) is a stout and erect herb with straight and undivided stem. The spiny plant is very popular as a medicinal plant in Bangladesh as well as the Indian subcontinent.

Leaves are lanceolate, subsessile, acute at both ends with long whitish hairs, dense with straight and stout thorns that grow from each node. Outer leaves are longer than the inner ones. Both leaves and thorns remain in upward direction.

Flowers in axillary whorls. They are bright violet or bluish purple and red, sometimes whitish with soft and minor hair, corolla 2-lipped. Flower blooms in the winter.

The body of the plant contains alkaloids, phytosterols, stigmasterol, lupeol and essential oils. Its seeds contain oil, enzymes and sterols. The plant is cooling and diuretic in cases of hepatic obstruction, dropsy, rheumatism and dise…
Read more 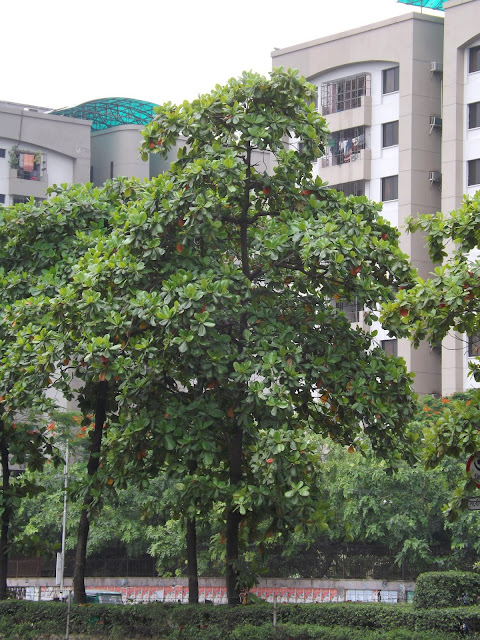 Kaat-badam or Bengal almond (Terminalia catappa, family: Combretaceae) is a large deciduous tree with spreading horizontal branches. It is found in the tropical Asia, Africa and Australia.

During winter the beautiful green leaves of terminalia catappa turn to red.


Flowers appear in the summer.

Flowers are small, grey white, clustered on axillary or terminal spike. Flowers on the upper part of the inflorescence are male and those are on the lower part are bisexual.

The tree with nice canopy is planted in avenues and gardens as ornamental tree in Bangladesh.


Propagation of the plant is caused by seeds.
Read more

Guloncho or Heart-leaved moonseed (Tinospora cordifolia, family: Menispermaceae) is a deciduous creeper with hard and long stem, climbing other trees or fences. Bark on the stem is as thin as paper. Aerial roots come out of the stem when the plant grows older. The plant is found everywhere in Bangladesh except southern part. It is also native to South and Southeast Asia.

Fruit is a drupe, brilliant red when ripe. This attractive fruit is inedible to human. 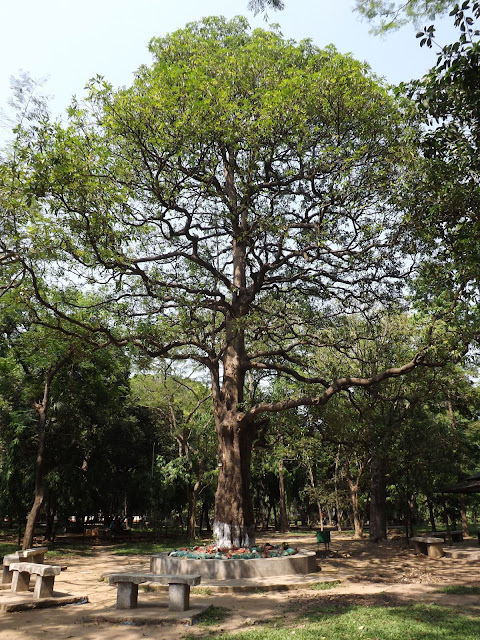 Chatim or Devil's tree (Alstonia scholaris, family: Apocynaceae) is a much branched tall tree. The evergreen tree gets a height of 15-20 m. Its trunk is dark grey, slightly rough. The good looking tree is found in South and Southeast Asia.
Flowers are greenish white, occurs in a large cluster, extreme scented. For this its presence is felt from afar at night. This is one of the main features of the tree.

Leaves are narrow, obovate, 10-18 cm long and 4-5 cm wide; shiny above, pale beneath. Leaf breaks if you fold. The canopy spreads like an umbrella. Wood is white and soft. Leaves, branch, trunk─overall whole tree contains milky latex. In Sanskrit, it is called Shopto-porni (seven-leaved tree). Though a rachis holds 4-7 plates usually, sometimes 8.

It blooms in late Autumn (Sep-Oct).

Fruits are light green, slender, cylindrical, 20-50 cm long. Ripe fruits burst. They remain on tree like this for a long time. Its propagation is caused by seeds.
Its wood is useful to make pencil, match…
Read more 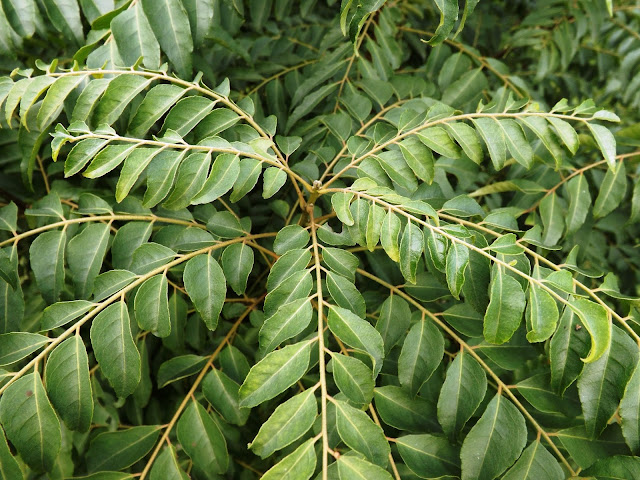 Karipata or Curry tree  (Murraya koenigii, family: Rutaceae) is a shrub-like small tree with canopy. Bark is grey. The strong odorous tree can be seen to be 10-15 feet high. It is found everywhere in the Indian subcontinent.


Aromatic  oil is made from its leaves. It is stimulant, energizing. Flower and root are used in blood dysentery, nausea and fever. It is originated in India and Myanmar. Wood is used to make agricultural equipments.

Fruit is oval. Immature one is green, ripe one purplish black.


It is a beautiful leafy tree. Scented leaves are cooked with fish to give a flavour to curry. In Bangladesh the woody tree is usually planted in gardens. If regular pruning it can be quite lovely.
Read more 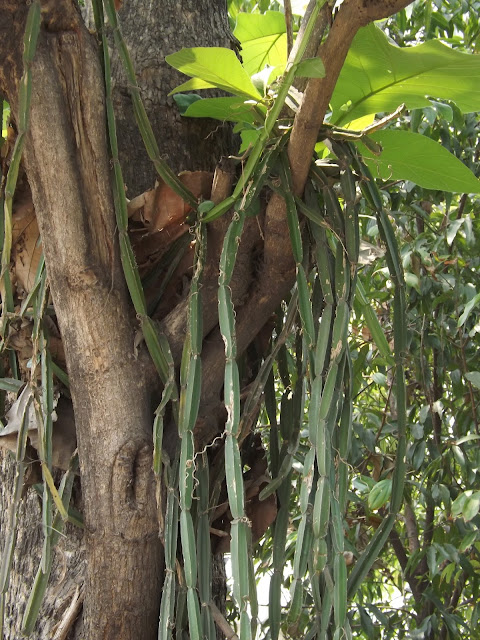 Harjora lota or Veld grape (Cissus quadrangularis, family: Vitaceae) is a deciduous climber with smooth, stout, succulent, quadrangular stems. It has simple tendrils, born opposed to leaf. The stem of the plant has great repute in the treatment of bone fracture. That's why it has been named 'Harjora lota' or 'Harbhanga lota' in Bangla.
Other local names: Harenga, Kumor-lota

It is native to Bangladesh, India and Sri Lanka. The perennial climber is also found in Africa, Arabia, and Southeast Asia. It has been introduced to Americas.

The large branched climber's leaves are simple, 3-6 cm long and 2-7 cm wide, fleshy, cordate, 3-5 lobed, toothed, acute to obtuse at apex, petioled, glabrous on both surfaces., opposite.
Inflorescence umbellate cymes, glabrous. Flowers are reddish, corolla lobes 4. Fruit is a berry, globose, red when ripe.
An extract is used as a cure for scurvy and irregular menstruation, and in ear and nose complaints. The stem has great repute in …
Read more 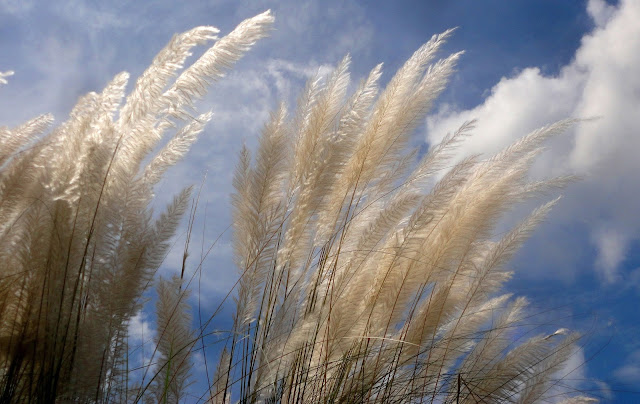 Kaash (Saccharum spontaneum, family: Poaceae) is a perennial grass can be seen along the edge of rivers and canals. It can get a height of 5-6 m. Its trunk is straight, hard and long. Kaash is native to Indian subcontinent. For decades Kaas has been used as an Ayurvedic medicine in different kinds of diseases in this area. Flowering time is autumn (Sep-Oct).
Other Bangla names: Kaiccha, Khag, Kaissha, Khagra, Kush.

Bangla literature is inspired by this beautiful and incomparable flower. Autumn means Kaash─we, Bengalees believe that. When autumn comes, Bengalees became crazy for this flower!


Kaash spreads like a vast empire! Stem is cylindrical, fistular. Leaves are tall and slender, alternate. Buffalo prefers this grass. Thick ropes are made from stem scale.

Propagation is caused by divisions. Country's one of the paper mills was based on this grass. It is used in jaundice. It is pretty effective to prevent soil erosion.
Read more 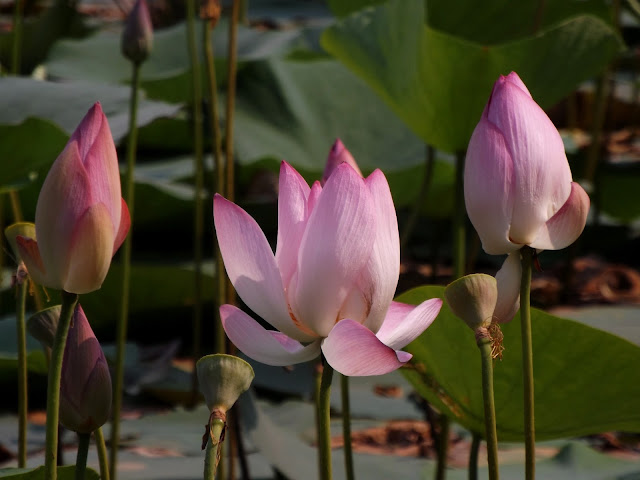 Padma or Poddo, (Nelumbo nucifera, family: Nymphaeceae) is a large and erect aquatic perennial, found in the water bodies of rural area of Bangladesh. The plant is also native to Tropical Asia. Padma is the national flower of India and Vietnam.


It blooms mainly in the rainy season.


Leaves and flowers float on water.

A kind of alkaloid is collected from petiole and it is used in fever, liver and heart diseases. Young leaves, petiole and rhizome are eaten as vegetables. 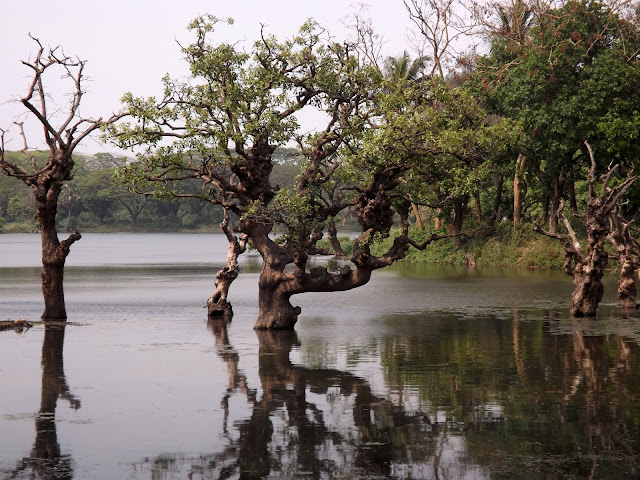 Leaves are short petioled, serrated, 7-12 cm long and 3-7 cm wide, crowded at the end of the branches.

Flowers are small, pink to red, sub-sessile, purple red with numerous stamens. Inflorescence is 20-30 cm long, pendulous raceme, flower openning from top to downwards. The 4-merous flowers are grouped in long & pendulous racemes up to 20-30 cm long. The cup-shaped calyx is light green in color. Flowers bloom in April-May.  In the winter
Its bark has tannin which is useful for heart diseases. Powder of seeds works expectorant and applied to cure cough of children. Tonic is prepared from leaves and roots. Fish poison is also prepared from its roots.